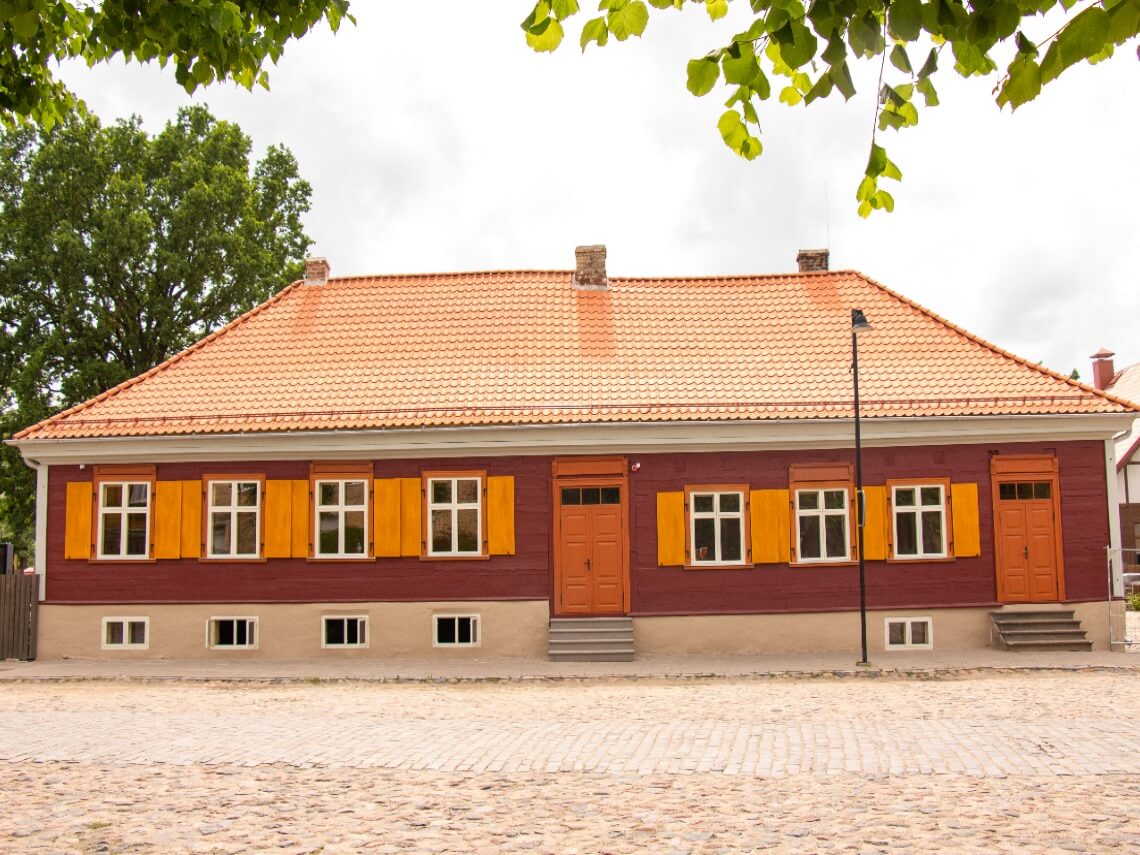 prev
next
View the embedded image gallery online at:
https://visit.jelgava.lv/en/sightseeing/muzeji-un-ekspozicijas/item/5129-jaunums-dziveszinas-un-arodu-seta#sigProId7b64fe9040

House of Latvian traditions and crafts

The house is given the status of an architectural monument of national importance and is located on the grounds of the urban planning monument of national importance, the Historical Centre of the City of Jelgava. In the 1813 plan of the city of Jelgava, it is possible to identify the part of the city where the building on 2 Vecpilsētas Street is located. It is a building made of wooden structures, which were no longer permitted to be built in Jelgava under the building regulations of 1813, so there is reason to believe that the house’s origins date before 1813.

In the second half of the 18th century to the beginning of the 19th century, it was a residential house with a warehouse next to it.

In the block of Jelgava Vecpilsētas Street, where the House of Latvian traditions and crafts is located, a unique historic street network and density pattern have been preserved to this day. The building area was formed between the 18th and 19th centuries. It is the oldest building part of the city of Jelgava that was not destroyed during World War II.

In 2008, a memorial sign Dobeles vārti (Dobele gates) was installed next to the house of Latvian traditions and crafts, symbolically marking the location of one of the city’s historical gates in the 17th century. From Dobeles vārti, a road of nails winds along the ground, marking the location of the ancient city’s rampart. The nailed road in the streets leads from the crossing of Dobele and Vecpilsētas streets to the crossing of Uzvaras and Ausekļa streets. All 800 hammered nails were made at a local blacksmith in Jelgava.

Renovation of the House of Latvian traditions and crafts

The construction and renovation works in the buildings at 2 Vecpilsētas Street and 1 Jāņa Asara Street were carried out by SIA Warss+. The building research process began in 2017, while the restoration and reconstruction works began in February 2021, with the objects going into operation at the end of July 2022.

As part of the construction work, a portion of the foundation was bricked over and waterproofing was built for the exterior walls of the log house. During the restoration of the walls of the house, they were carefully dismantled and, based on the study of the logs, restored using the decayed parts of the walls. The gaps between the wall logs are filled with moss for thermal insulation, as it was in ancient times. All well-preserved timbers were used to the maximum extent during the building renovation process. During the study of the interior decoration layers, an artistically valuable polychrome decoration was discovered – in the 18th and 19th centuries, both freehand and stencil painted patterns on the upper part of the walls. The decorative wall strips in the interior of the building have been restored.

The interior, wall decorations, engineering communication solutions, stoves and ovens from earlier times have been preserved after the restoration.

A courtyard with a small stage, weaver’s and ceramic workshops, and a family room have been created in the House of Latvian traditions and crafts.

The House of Latvian traditions and crafts was created with the aim of promoting the skills of ancient Latvian crafts and, in accordance with Latvian traditions, encouraging public participation in various events.

The building on 2 Vecpilsētas Street and the related infrastructure necessary for the object’s functioning – the reconstruction, restoration and improvement of the surrounding area of the building on 1 Jāņa Asara Street, creating the House of Latvian traditions and crafts has been implemented by ERDF project No. 5.5.1.0/19/I/005 within the framework of the Preservation and Development of Cultural Heritage in Jelgava City.

The visits are possible on your own or by prior reservation, you can go on a tour of the building accompanied by a specialist, learn about the history and interior of the building, discover the nuances of the weavers’ work, see how a folk costume is made and try out weaving skills yourself.

Excursions for both individual visitors and tourist groups are available in Latvian, English, German and Russian.

The folk costumes of Latvia’s regions, as well as their accessories, can be purchased both on the spot and by placing an order.

back to top
Jelgava, Vecpilsētas iela 2