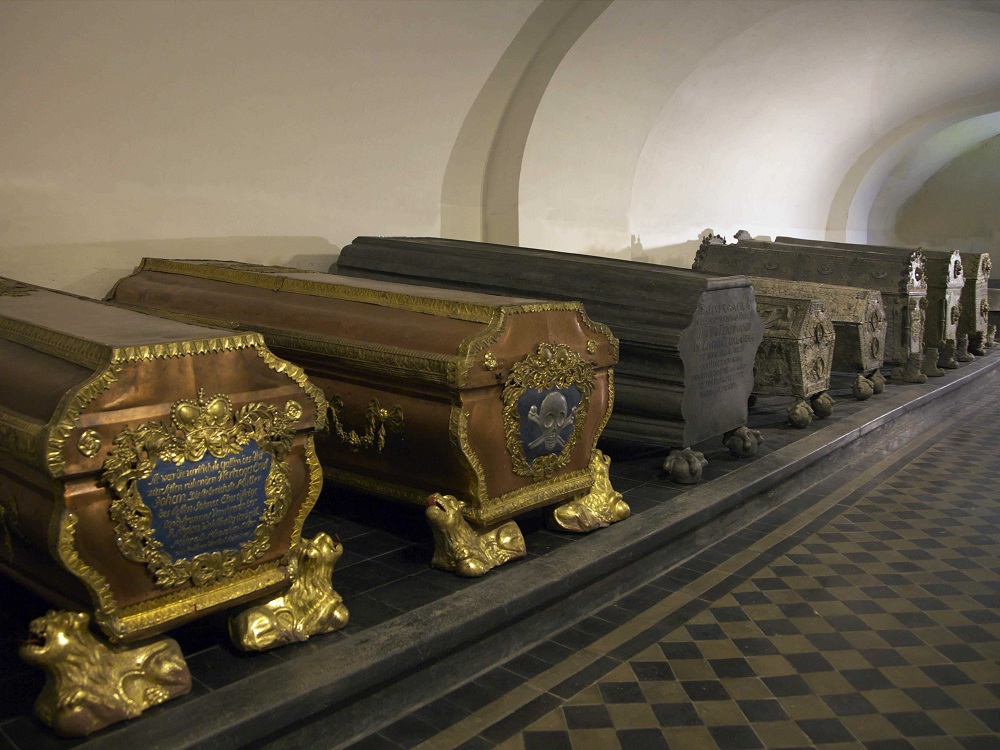 prev
next
View the embedded image gallery online at:
https://visit.jelgava.lv/en/sightseeing/muzeji-un-ekspozicijas/item/80-rundales-pils-muzeja-ekspozicija-jelgavas-pili-kurzemes-hercogu-kapenes#sigProId6e9a759d35

Duke tombs date all the way back to 1582. Throughout history they have been repeatedly destroyed and looted. In the 70’s of the 20th century the arrangement and research of the burial began, as well as conservation and restoration of the textiles.

Currently, there are 21 sarcophaguses made of metal and nine wooden coffins containing the remains of 24 members of Kettler dynasty and six representatives of Biron dynasty, all whom died during the period between 1569 – 1791.

In 1990 the sarcophaguses of Duke E.J. Biron and Duchess Benigni Gottlieb were restored.

Since 2005, with the help and support of Courland Knighthood organization, the remaining sarcophaguses are being restored. In 2009 the sarcophagus of Duke Ferdinand was restored, in 2010 Duke Jacob's sarcophagus and in 2011 autumn - Duke Gotthard sarcophagus. Restored sarcophagus of Duchess Luise Charlotte was consecrated In 2016.

Alongside the tomb, restored costumes are exhibited as well as additional information about the people laid there can be found.

In 1989 Rundales Castle Museum took possession of the tombs and since 1992 the tombs are open to visitors.

Working hours for the 2021 season will be update.

back to top
Jelgava, Lielā iela 2