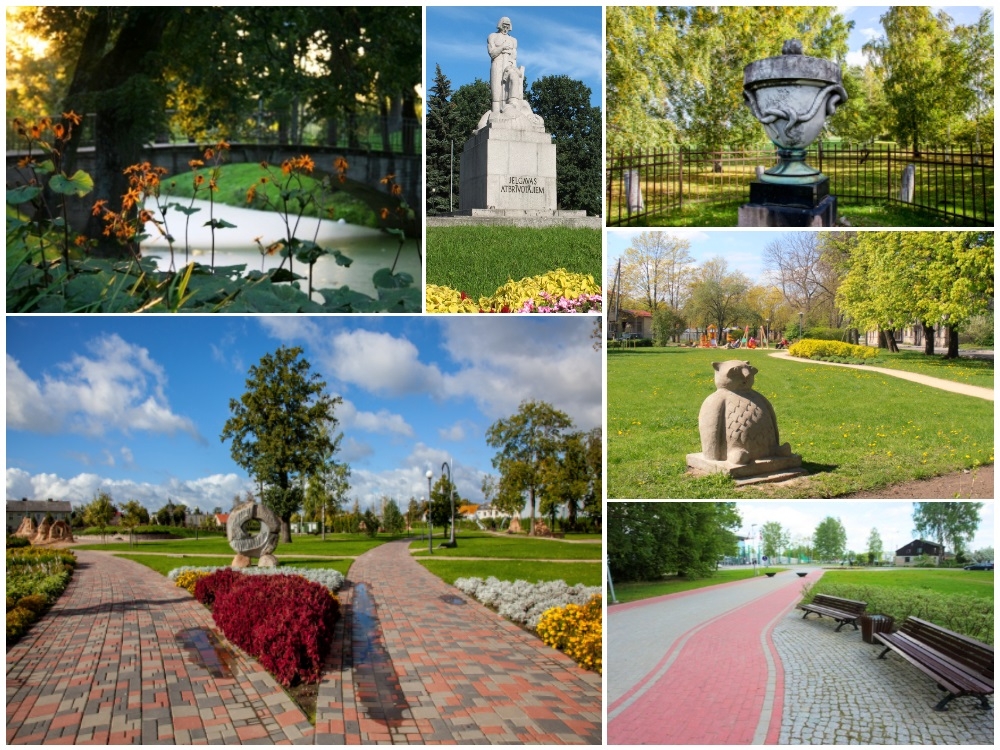 The creation of the park begun 1817, replacing the former castle ruins. The palace island has romantic canals, bridges and palace buildings, and the Governor's Island makes it one of the most beautiful parks in Jelgava. There are also several noble trees in the park - two chestnuts, an oak, a gray aspen. On the right side of the road to Riga, by the river Driksa, there is a white vase – all that remains from the former Palace Theatre  building built in 1913, which was destroyed after the World War II.

The Monument to the Liberators of Jelgava "Lāčplēsis" was unveiled on November 21, 1992 in the Station Park as a memorial for the victims of the Red Terror in 1919. It also has the World War II bomb shelters.

Raina Park is a favorite recreation area for residents of Jelgava. Jelgava Children and Youth Center "Junda" is located there. The park was opened in 1948, but in 1957 it acquired a monument for Jānis Rainis - a poet of the Latvian nation, Rainis, who was working in Jelgava several years as a lawyer.

The park has replaced former Jāņa cemetery. The grave site of the Latvian theater founder, Ādolfs Alunāns, and the monument by the sculptor Burkards Dzenis (1913) have been preserved. There is another monument to Juris Māters, one of the workers of the Latvian awakening movement and the founder of the Jelgava Latvian Association.

The park was created as a garden for the architectural monument - the Villa Medem. During the period of the Latvian Popular Front, it was proclaimed the local Hyde Park, as it hosted all the major rallies of the awakening movement. Since its reconstruction in 2007, Uzvaras Park has hosted many concerts.

Right next to the Riga Street, lies Valdeka Castle – an 18th cenury a baroque style hunting castle with a small park.

The square in the corner of Mātera and Vaļņu Street is a reminder for the place, where the medieval fortifications of the city once ended. The fortification walls were surrounded by a ditch in Duke Jacob’s times. Over a period of time the ditch became very smelly and acquired the name of "Smelly ditch". In the beginning of the 20th century, the new authorities decided to remove the fortification walls and cover the ditch. They built Nicholas church instead and created a square. The church was burnt down during the WWII.

After the World War II, it was decided to build a central city square at the former Jelgava market area. The market was moved further, next to the bank of the Driksa River, a place outside the former medieval city borders, near the Uzvaras Park.

At the crossroads of the former Jelgava-Riga highway and Kalnciema Road, lies a tree ally, which was planted during the Forest Days in 1936. Among the birches and oaks, there is a Viennese oak, planted in the presence of General Jānis Balodis. The ally has become a gathering place for the victims of repression in Jelgava and their loved ones, as well as a place for commemoration events for the victims of repressions.

The monument of the 19th century still stands by the edge of the Dobele highway - it is called Love Alley. The birch alley is called Love Alley because it was planted by newly married couples. It is a monument for trust, friendship and beautiful dreams about the past and future. This place is bound by a legend about two friends, who lived in the 18th century – Tetch and Shvander, Courland-Zemgale Duke advisors. They loved the same girl but let her get married to someone else. Both of them fell in love with the same girl, but for the sake of their friendship, they rejected their love and remained bachelors, while the girl married someone else. Shvander and Tech paid her a huge dowry. The friends continued to care about the young couples even after their deaths. They left all their property to Jelgava craft guild, which was supposed to pay the dowry for the first craftsman's daughter to get married the next year. The new couple should get married in the church and plant a birch tree at the alley. The two friends were buried on the opposite sides of the alley, each having a monument.  However, only one monument has survived – the Vase of Tetch. The tradition of planting a birch tree in the Love Alley has remained till today - the newlyweds come here on their wedding day, plant the tree and visit it on their anniversary.